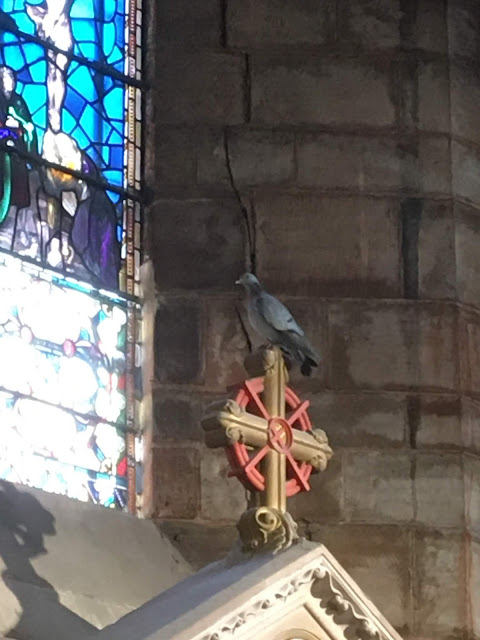 I thought, dear follower, that you'd like to hear news of an unexpected visitor to my ancient building.

Despite the Abbey sadly now being closed to visitors or worshippers, a feathered friend has found his (or her) way in and has been flying around the building, evading all attempts to show him (or her) the exit.  The pigeon is in great shape, and seems to be enjoying the sun streaming through the upper windows of the lovely Abbey.

Now this is not the first time we've had wild visitors.  Birds do occasionally fly in, but I can also remember bees nesting in one of the upper windows, Mr Gary's charming dog friends and for all I know, there might at one time have been bats in the belfry.

There are also occasional squeaks as I've already mentioned.  Sometimes they seem to be coming from the nearby railway line (I told there is quite a bend in the track), sometimes it has been the Abbey's PA system hyperventilating, and at other times there are the s…
Post a Comment
Read more
March 24, 2020

The long overdue work on me has now begun, and I am being dismantled - yes, dismantled!  And no, this is not at all painful

For more years than you can imagine, my pneumatics have been drying out and failing, and I have become more and more unreliable

I would love always to fill this beautiful building with my rich tones, and usually that is just what I do, but not always. My many pneumatic motors are a patchwork of sticking plasters, my lovely pipes are covered with 60 years' worth of dust, and woodworm are munching their way into my timbers

The day work began is a day I will always remember.  Hundreds of lead tubes were removed (for recycling), my keyboards extracted, the pedalboards removed revealing countless lost pencils and piles of dirt, my stop heads removed and the the lovely console removed

But I am still here, waiting eagerly for all the work to get done so we can have that epic celebration promised by this building. I am going to look sad for a while, but …
1 comment
Read more
March 10, 2020 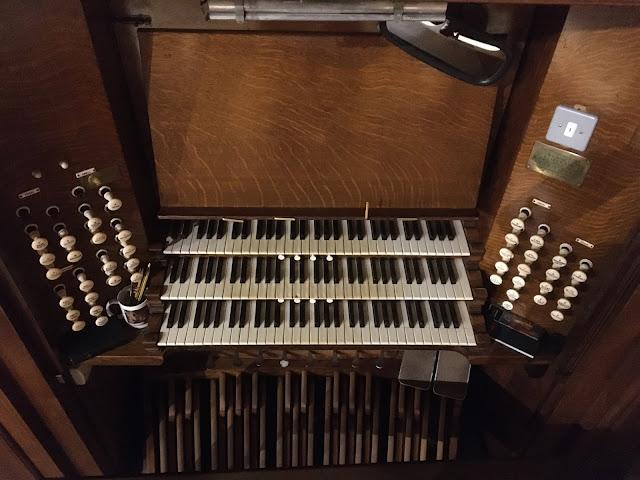 A hidden treasure trove?
More secrets will be revealed later this year, but in an unexpected place
If you sit on my stool facing my lovely console, and look down, what do you see?Well, your feet obviously, but also some little levers, two much larger pedals on the right hand side, and lots of large piano-like keys-which my organist friends play with their feet
No secrets so far!
But look again.The little levers (which draw various combinations of stops) are in a slight concave curve, to parallel the curved shape of the actual pedal notes.But the wood board behind the levers is shaped the other way, i.e. convex curved.How does that work - that’s secret no 1
No 2 secret is that there is a hidden treasure trove down there.Under the pedal notes, buried in years and years of dirt and dust, are lots of lost pencils, rubbers, keys, and maybe even coins, and maybe even marbles or precious stones-who knows!
The pedal board will be taken up by Mr Gary and I know he is looking forward to diggi…
Post a Comment
Read more
February 24, 2020 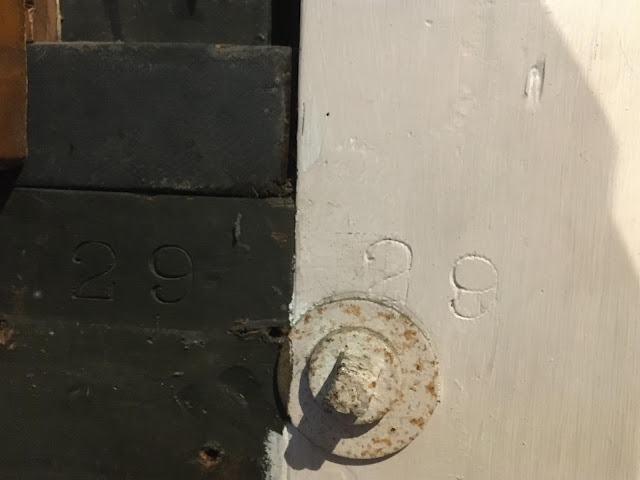 Another secret
Another of my secrets has been unravelled
The other day, nice Mr Steve was looking at one of my beams (he obviously had nothing better to do) and spotted some scratchings.  Some of this appeared, he thought, to be chorister initials, or maybe the initials of a former organ player or two
Then he looked more closely and spotted the number 60, etched in to the timber
Looking at another horizontal beam, which folk already realised has my real name 2412 (but we much prefer Hillie don't we?) etched in, he realised that there was the number 61 etched in at one end, where it joins one of my upright, main pillars
Bingo!! (or should that be "bourdon"?).  These are numbers made by Mr William, in 1911, to help his team of men put me together!
The secret, now revealed, is that I am a kit girl.  I was put together in Mr William's London workshop, then before taken apart for bringing here to my lovely Abbey, they etched numbers onto my beams where they join other be…
Post a Comment
Read more
February 18, 2020 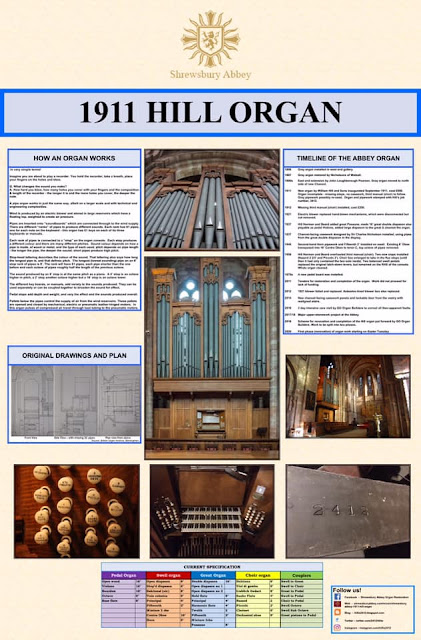 New boards
From my lofty perch, I can see 2 new display boards down below
These boards, people tell me (I can’t actually see what’s on them!) have pictures of me, in all my unfinished, dirty glory, and information about my history and the work that’s planned to start after Easter
These boards are also (so I’m told) so colourful that a casual visitor to the Abbey cannot fail to see them.Some of the writing might be a little on the small side, but if that encourages visitors to get all close and personal, then that’s all good.
Why is all this important?
Well I am of course a very modest old lady, so it is good for someone else to extol my many virtues, and explain how much improved I will be after all the work is completed.
But there is also talk of money - the modern kind, not my favourite pounds shillings and pence.Bearing in mind I only cost £1,100, isn’t it amazing that over £125,000 has now been raised towards the cost of my renovation and completion?It’s also amazing that that is…
Post a Comment
Read more
February 13, 2020 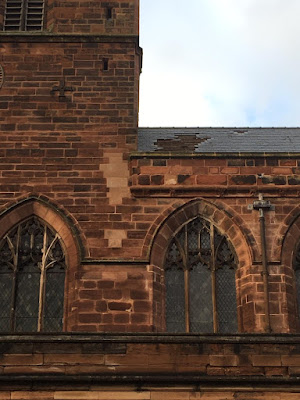 Stormy!
We've just had a massive storm.  I'm told it was called Ciara, though I've no idea why that lovely name should be given to such stormy weather
Well the wind swirled around my Abbey, and the rain lashed down.  Then there was the most tremendous bang, right in the middle of Morning Prayer, and some of my friends discovered lots of tiles had slid down the roof.  I haven't seen this for myself, obviously, but did hear the crash and certainly heard all the discussion that followed
Storm Ciara was massive, but over my 108 years, I've seen others, although maybe not so windy.  In 1947 the nearby River Severn rose so high that a rowing boat came up the central aisle to make sure I was still alright.  Then, in 1960 the roads outside were completely flooded as they were again in 1998.  Pictures in the Abbey show all of this!
Later, during wonderful choral evensong, I got the blame for an A flat whistle.  Mr Steve thought I had developed a cypher.  Now I have had occ…
1 comment
Read more
February 09, 2020 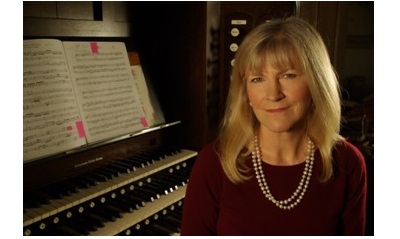 Another spectacular recital
I’ve already told you about the wonderful organists coming to play me, your friend Hillie, each month.These are international recitalists!They are used to playing the top organs in Great Britain and abroad.Yet here they come, to help put me on the map, and to help raise money for my renovation and completion.
The second of these organists played just recently.This was Miss Catherine (Ennis) and she played music all about angels including one piece by my most favourite of all composers, Sir Edward
Her playing was just marvellous.She made me sound as if I was young again, and brought out all sorts of sounds I hadn’t heard in many a year
And so many people had come to hear me, and hear her play.My friends counted more than 120 people, and I’m sure there were other folk lurking in corners
All that is amazing.Also amazing is that I’m told Miss Catherine played in her winter coat.Now I don’t complain about the cold (actually I prefer the Abbey not to be hot!) bu…
1 comment
Read more
More posts